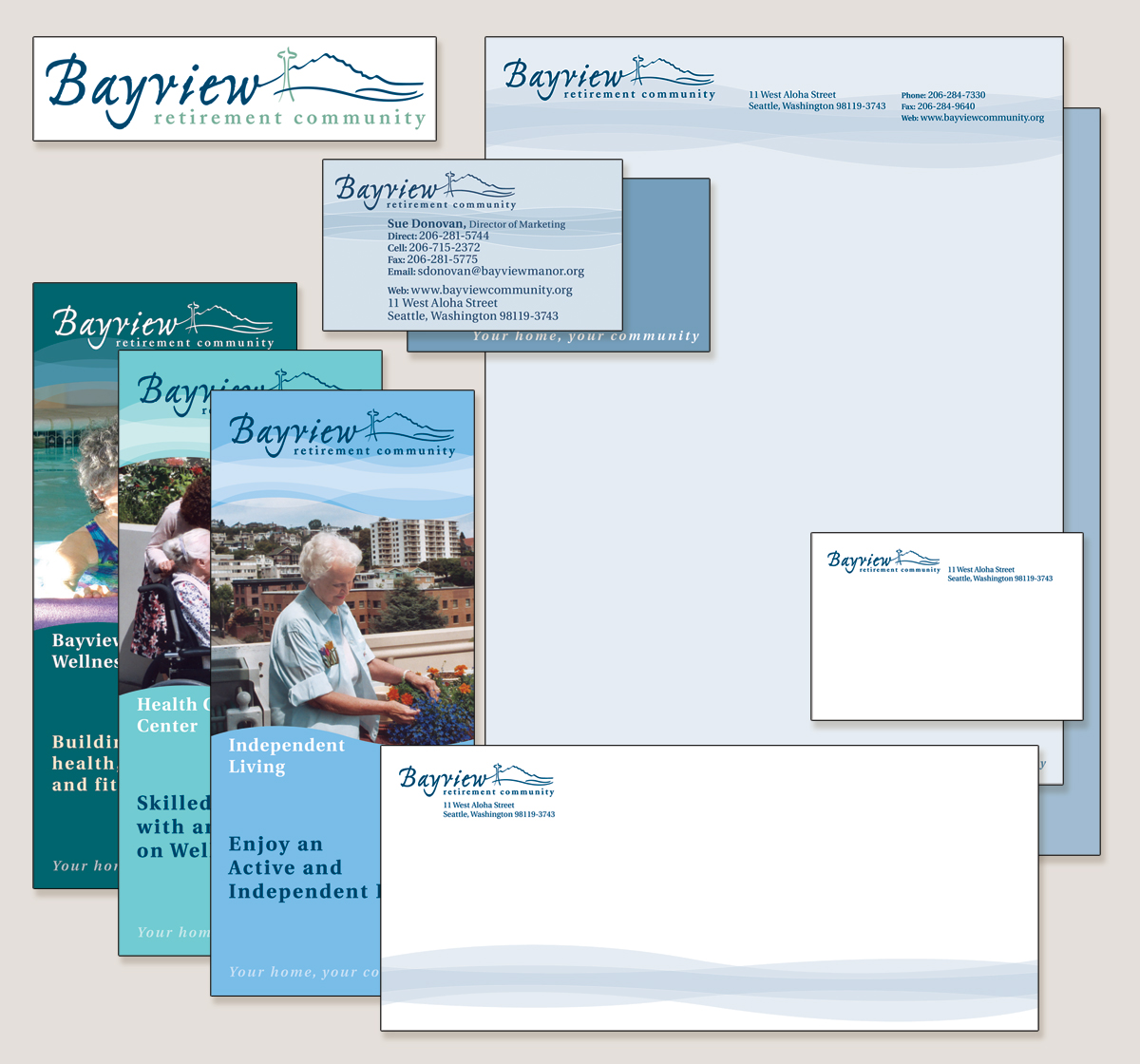 Challenge: How to Update the Brand of an Established Company without Losing its Long-built Identity

Bayview Retirement Community is a retirement community on lower Queen Anne in Seattle. The people who run Bayview are only rivaled by the incredible view in excellence. Bayview had been an established retirement community since 1962. In fact, their opening coincided with the Seattle World’s Fair and the now iconic Space Needle and Seattle Center. With such a long history and established presence, Bayview faced the challenge of updating their brand identity without losing the culture built into that identity.

After changing their name from Bayview Manor to Bayview Retirement Community, they wanted a new logo and identity that would work across the spectrum of services they offer to their residents and community at large.

Original logo and typemark from 1962:

Despite an established presence, the only consistent element of Bayview’s previous identity was their logo. They didn’t have a set of guidelines for their marketing and business collateral aside from tradition. Their brand was tied into their service and location.

Our goal was to define what was important to the Bayview brand and then bring out those important elements in an updated identity, while creating collateral that is easy-to-read for seniors – their target audience.

Our solution was to create a two-fold identity that addressed both their incredible location and the amazing community/service.

Bayview has the most amazing view of Puget Sound and the Seattle skyline. The view’s from their 10th floor balcony can’t be beat. We incorporated the idea of this location into their identity by emphasizing view imagery. Their collateral showcases skylines all taken from Bayview. We further emphasized their location, and name, with a strong illustration and imitates water and waves. The illustration is backed by a palette of water colors in blues, teals, and greens.

Once a person steps into Bayview, they feel completely at home. The staff and residents strive to make it a true community. We emphasized this by using imagery of Bayview’s residents in all of their collateral – no stock photos.

With a new name, Bayview needed a new logo that would work with their new identity. They wanted something that would evoke past logos, but provide a more up-to-date face for the company. We utilized the Space Needle, mountain, ocean theme in a much more iconic way, while also keeping a similar handwriting-like typeface, but making it an easier one to read.